The last field trip with a few of my Horizons students was one to remember. As we drove to Macon, having finished the summer program, our conversations were light, and full of warmth and comfort. I don't think any of us could have imagined what the next day had in store, nor did we realize how much the next day would deeply impact us. In all honesty, we really didn't have much information on what to expect, and in further honesty, the kids didn’t care to worry; they were more focused and excited by the thought of spending an evening swimming at a hotel pool with each other.

As the night ended and we discussed our hopes for the competition, the kids seemed a bit nervous to compete, but nevertheless laughter, joy, and light conversations overshadowed any anxiety they may have felt. It’s important to stop here and describe some of our scholars before I discuss the exhibition itself. The girls: Knowledge, Erinn, and Samiya, were very laid-back, sweet, and easy-going. During camp this summer, they were the ones always willing to participate, and generally kept the classroom lighthearted with their sweet smiles and angelic laughs.

The boys on the other hand, not so much. We took four: LaFayette, Sincere, DeMarcus, and Xavier. To put in short, these boys went through the most recognizable transformation this summer. They worked really hard this summer to find their voice, and define their own ‘moods'. Frankly, they worked the hardest at communicating their disappointments, fears, and anxieties in ways other than hitting or arguing. So although I had a fun time with the girls, it was the boys that needed and were affected the most by this trip.

On the day of the competition, we walked into a conference room, jaw-dropped, and full of amazement to see so many black and brown kids surrounding STEAM projects that looked like they were built by engineers. As we all walked around the room to visit other student’s projects, all you could hear was, “Whattttt, this is so dope,” “Ya’ll made this??” Our students were astonished with what could be done, by people who were to them, ‘the same as them'.

I can’t begin to describe the joy stained on all the boy’s faces when they learned that they could build their own Play-Station or X-box games, or how the girls giggled when they met a group of students who made wedding dresses out of recycled paper. At times their excitement was too much to contain as the exhibition judges came by our table to hear our students detail how they built a submarine this summer in robotics class. As they spoke and ‘showed what they knew,’ Sincere came up to me and said, “Mrs. Jones, we need to prepare early next summer, we need to start on day one so we can come back and win.” As I nodded to his suggestions, it hit me!! Just 4 weeks ago, Sincere was at times disinterested and non-chalant about learning robotics or anything at Horizons for that matter, now here we were planning our execution for next year’s competition.

In conclusion, I think this trip solidified my belief in Horizons' mission and core beliefs. If you provide students with a fostering environment to learn, encourage them with a growth-mindset, and surround them with teachers and advocates that are relentless in pursuit for academic equity, you will find on the other end, students just like Sincere, waiting to be heard, waiting to be loved, and waiting to be believed in. I am very grateful to have experienced the STEAM exhibition and to have witnessed true transformation in my students. Thank you! 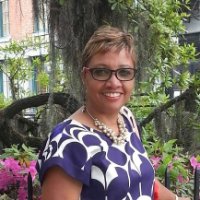 I’ve had the pleasure of being a Horizons staff member for more than 13 years at Horizons Atlanta at Holy Innocents’ Episcopal School, where I now serve as the Program Coordinator. I’ve been an educator for more than 35 years, and I recently retired from the Fulton County Schools system after teaching Kindergarten at High Point Elementary for 29 years.

My Horizons journey began with me teaching computer literacy and photography three days a week when the program was in its infancy. I was so inspired by the mission of Horizons and the educators who were building the inaugural program at Holy Innocents’. In the beginning, I worked three days a week and would tote in borrowed laptops and cameras for the students to use. As the program grew, I worked directly with teachers on instruction and administered reading assessments. Currently as program coordinator, I work in partnership with our Site Director and Parent Liaison, to build strong relationships with parents, students, Horizons educators and the surrounding community. Our site now serves more than 120 students from neighboring schools!

Every child chosen for the Horizons program is given the skills and confidence to believe that failure is not an option. I’m so blessed to have been a part of the Horizons family at Holy Innocents’ for so many years.  We are a family that cultivates and grows each of our students socially, emotionally and academically every summer and throughout the year.

One of the most endearing things about our “Global Academy” is seeing our students take action by giving of themselves through community outreach. Each class is responsible for a citizenship project connecting to their grade level theme either locally or globally. The class projects have to focus on at least one of the following areas: Awareness, Advocacy or Direct Action. Last summer, the middle school students organized a car wash and donated proceeds to the Malala Fund to help girls around the world go to school and exercise their right to an education. Rising second grade students established a relationship with residents a nearby nursing home facility and visited them weekly. At the end of the summer session, the students and seniors exchanged handmade gifts. The whole program, including our parents, raised $500 through the combined efforts of a penny drive, lemonade stand, and snack sales, and donated it to the orphanage Home of Home in N'zerekore, Guinea. Students learned about the orphanage and organization from its founder, Holy Innocents' alum and former child refugee, Sam Johnson, who spoke to our students during the program.

I am proud to be a part of Horizons Atlanta at Holy Innocents' Episcopal School because we are empowering students to make a difference and become leaders in their respective schools, community, and the world in which they live.